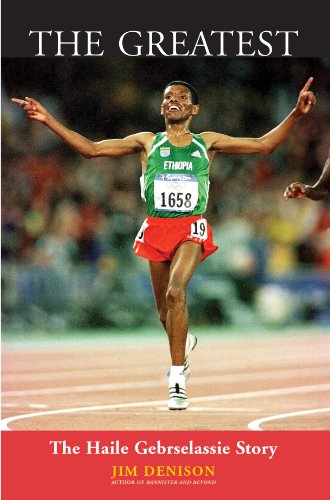 The Greatest: The Haile Gebrselassie Story

Two Olympic 10,000m golds; eight world championships indoors and outdoors; seventeen world records over four different distances; a fifty-four race winning streak—Haile Gebrselassie utterly dominated a decade of distance running. The Greatest is his authorized biography, written by Jim Denison, who worked on it with Haile for over two years, visited him in Ethiopia, and traveled with him on the European track circuit. Haile’s life story is fascinating, detailing his early years of hard poverty in war-torn Ethiopia, his relentless training, his rise to godlike status in the track world, and the good works he has done for his country with his fame and fortune. Most of all it is a glimpse of the kind, fascinating man behind all the records and medals.

“Haile Gebrselassie is the best distance runner I have seen in the last quarter-
century, the most electrifying personality, and somewhat of an enigma, given his Ethiopian roots. With this wonderful book, Jim Denison allows the whole world to learn more about Haile The Great, a distance-running star whose brilliance won’t soon be forgotten.”
—Amby Burfoot, executive editor, Runner’s World, and 1968 Boston Marathon winner

“Be in no doubt Haile is the greatest distance runner the world has ever seen.”
—Dave Bedford, former 10,000m world record holder,
and currently race director for the London Marathon

“Haile is an elegant champion and a fine example of sportsmanship.”
—Lasse Viren, Olympic double-gold medalist

“In my view Haile is the greatest distance runner of all time and a fantastic testimony to his legacy is that the man who is going to challenge for that title ‘the greatest’ has been nurtured by Haile and his coach, Dr. Wolde-Meskel Kostre. Haile has taken care of the present and he is passing on the baton to the future, to one of his pupils, Kenenisa Bekele.”
—Brendan Foster, MBE, 1976 Olympic bronze medalist 10,000m,
former world record holder 3000m, and presently Track
and Field Commentator for the BBC

“Haile’s accomplishment is a class act on and off the track. He is not only admired for his running, but his universal smile (whether he wins or finishes second).” —Mebrahtom “Meb” Kheflezighi, two-time Olympian
and American record holder for 10,000m